Drivers who choose to drive while taking prescribed medications or illegal substances pose significant risks for other drivers on the road.
Many drugs have varying side effects that can affect normal brain function and motor skills. But despite these dangers, a 2014 study by the National Highway Traffic Safety Administration (NHTSA) found that almost 25 percent of drivers tested positive for drugs that could be considered dangerous if you’re behind the wheel of a vehicle.

There are many types of illegal substances, and there are a broad range of risks associated with them. For example, stimulants such as cocaine can cause erratic driving, and marijuana can cause slow reaction times and worsen judgement.

Even drugs that have been legally prescribed by a doctor can cause side effects that impair driving abilities. This issue involves every age group—from teens to elderly drivers—and many individuals are unaware of the potential dangers and side effects of their prescribed medications prior to getting behind the wheel. To protect yourself and others on the road, ask your doctor if it’s safe to drive after taking any new prescriptions. Common side effects of prescription drugs can include dizziness, drowsiness, and stroke. Also note that certain drugs can cause harmful effects when mixed with another drug or alcohol. 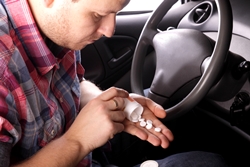 For drunk driving, a simple roadside test can determine blood alcohol content (BAC) and conclude whether a driver is over the legal limit. However, it may be difficult to determine whether a driver is under the influence of drugs. To address this issue, many states are developing drugged driving training programs for police officers to help detect dangerous drivers under the influence of drugs, and all drivers can learn to identify the red flags before letting a friend or family member get behind the wheel:

Despite recent changes in laws relating to marijuana in some states in the U.S., drivers should be aware of the risks related to driving while under its influence. The second most common substance related to car accidents, after alcohol, is marijuana. It can cause a number of side effects that could be dangerous when driving, including:

In Virginia, it is illegal to operate a motorized vehicle while under the influence of any drug that may impair driving ability. Virginia has also adopted a “per se” rule that allows law enforcement officers to legally arrest any driver if the officer has reason to believe the individual is under the influence of drugs. Any person arrested for drugged driving will be subject to DUI charges and face penalties, which can vary depending on the number of previous offenses. Drivers who are suspected of driving under the influence of drugs are subject to the implied consent rule, which states that the driver may be required to take a blood test to determine drug presence. Refusal to take the drug test results in additional penalties.

If you were involved in a drug-related accident, it is recommended that you contact an attorney right away. It is not as simple to determine drugged driving as it is to determine drunk driving, and testing can take much longer. If you believe a driver is under the influence of drugs during the time of an accident, be sure to mention your suspicions to first responders, as well as in the police report. Then contact the attorneys at Kearney, Freeman, Fogarty & Joshi. They can assist you following the incident and work to help you receive the most compensation for your claim.