What to Know About Drunk Boating Accidents

Each summer, tens of thousands of people launch boats off Virginia’s coasts or into its many lakes and rivers. While most people navigate these waterways responsibly, some make the decision to consume alcohol while operating watercraft.

Drinking while operating a boat is both a federal and state offense. If you or a loved one suffered injuries in a boating accident and you suspect alcohol may have been involved, you may be able to seek compensation through a Virginia civil court. 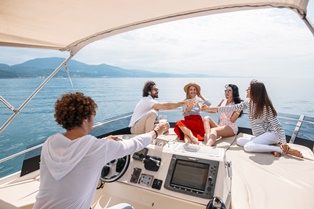 The Dangers of Boating While Drunk

Boating under the influence can be more dangerous than driving drunk. The wind, sun, vibration, and motion of the boat can “intensify the effects of alcohol and some medications.” This phenomenon is sometimes called “boater’s hypnosis.” Also, a boater can become tired due to the rocking motion of the boat, which slows brain wave activity. It’s also common for a boater who spends the day in the hot sun to become dehydrated—increasing fatigue and contributing to a feeling of intoxication.

Additionally, if someone is drunk or impaired on a boat, they may be more susceptible to slipping and/or falling overboard, leading to drowning. If they are steering or otherwise controlling the watercraft’s movement, there is a greater chance that a miscalculation in speed or direction could result in injury or damage to property.

Boating Under the Influence in Virginia

Almost everyone knows that it is illegal to drink and drive. However, few people know that operating a boat under the influence is against the law, too. In Virginia, a boat is defined as almost any sort of manned watercraft, from yachts and jet-skis to kayaks and canoes.

The Penalties for Boating Drunk

Virginia considers the operation of a watercraft while intoxicated a Class 1 Misdemeanor. Offenders may receive fines of up to $2,500 and up to 1 year in jail.

If a boater is convicted of boating while intoxicated, they may:

People who seriously injure another person while boating drunk may be convicted of a Class 6 felony and face a $2,500 fine and up to five years in prison.

If someone dies after a boating accident in which alcohol was involved, the watercraft operator or other negligent party can be charged with aggravated manslaughter, which can carry penalties of up to 20 years in prison.

Boaters who have prior convictions may face steeper penalties for repeat offenses.

Often, people who have been involved in a boating accident are not sure what to do next. They may be in shock or extreme pain with a potentially life-threatening injury.

Anyone who has been injured in a boating accident should always seek immediate medical treatment. A physician can help treat obvious wounds as well as detect injuries that might go unnoticed.

If a victim is physically capable of taking pictures of the crash, collecting potential witness contact information, and documenting their injuries, they should try to do so. If a victim cannot collect evidence at the scene, they should consider contacting an experienced Virginia boat accident attorney for help. If notified promptly, an attorney may be able to rapidly respond to the crash site and begin collecting evidence before it is moved or disappears.

People who have been injured in a crash should not talk about the accident afterward or communicate with any insurance company other than their own. Victims should also avoid signing paperwork or giving a recorded statement without having an attorney present.

Virginia has strict expectations for the reporting of boating accidents resulting in injury or death. The State Department of Game and Inland Fisheries, for instance, must be sent a written report whenever an accident:

Any boating accident or crash which results in death, disfigurement, or disappearance must be reported to law enforcement within 48 hours.

How an Experienced Boat Accident Attorney Can Help

Because boating accident cases can be complex, it’s important to contact a boating accident attorney right away. They can help ensure that cases and filings comply with Virginia’s reporting deadlines and statute of limitations.

Generally, a judge will only award a crash victim compensation if they can prove the other party’s negligence significantly contributed to or caused the accident. An attorney can help show:

In some instances, a boating accident attorney may be able to negotiate a favorable settlement with the at-fault party’s insurance company, saving victims the time, money, and hassle of having to take a case to court.

If the victim of a boating accident wishes to pursue a civil case against the intoxicated operator of a watercraft, they should always consider hiring a boating accident attorney. This is true even if the at-fault party is facing criminal charges. If they are convicted and the court orders they pay restitution, there is no guarantee that the amount of restitution will be sufficient to cover the injured person’s medical bills and other expenses.

A personal injury attorney can argue for greater damages, negotiate a higher settlement, and bring cases against multiple at-fault parties, depending on the circumstances of the accident.

Examples of economic damages include:

Examples of non-economic damages include:

The amount of damages a boat accident victim may be able to recover depends on the circumstances of the crash, the injuries or other losses suffered, and what evidence they are able to bring to court.

If you were injured or a loved one was killed by an intoxicated boat operator in Virginia, send us a message online, or call us today.