Since about half of all boating accidents involve alcohol or drugs, law enforcement takes this issue very seriously. That’s why Virginia police officers are allowed to treat intoxicated boat drivers the same way they would treat drunk drivers on land. Intoxicated boaters can be arrested without a warrant, as long as probable cause exists. An officer has probable cause if he sees the boat operator behaving in a manner that indicates he is intoxicated. Just as if you were suspected of drunk driving, if the officer thinks you’re boating while intoxicated, you’ll be pulled over. You will then be asked to perform field sobriety tests and asked to submit to a chemical test to determine your blood alcohol concentration (BAC). If you refuse, you’ll lose both your driving privileges and your boating privileges. 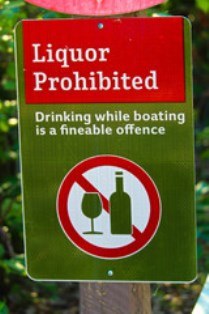 Boating While Under the Influence

All boaters on Virginia waterways must consent to breath and blood testing in order to determine the amount of alcohol or drugs present in their blood. Under Virginia law, an individual can be convicted of boating under the influence (BUI) if he operates a watercraft or motorboat while:

In Virginia, operating a motorboat while under the influence of alcohol or drugs is a Class 1 misdemeanor, with a penalty of up to $2,500 in fines and up to one year in jail. If a boater is convicted of operating a boat while intoxicated, additional consequences may include:

If a boater guilty of a BUI causes serious bodily injury to another person, he may be convicted of a class 6 felony. This means he could be facing up to five years in prison, pay a maximum of $2,500 in fines, and have his driver’s license suspended for at least two years. If someone dies as a result of the accident, the boater guilty of a BUI may be convicted of involuntary manslaughter—a class 5 felony. This carries a penalty of up to ten years in prison and fines of up to $2,500. If the boater is convicted of aggravated involuntary manslaughter, he may spend up to 20 years in prison. In either case, he will face a driver’s license suspension lasting at least five years.

If you’ve been arrested for boating under the influence, you’re facing the prospect of severe criminal and financial penalties. Additionally, a criminal record can severely limit employment and educational opportunities. If you’ve been charged with a BUI, you need professional representation by an experienced attorney who knows how to fight for you. To learn more, contact the vehicle accident attorneys of Kearney, Freeman, Fogarty & Joshi, PLLC by using the form on this page.