The Consequences of Refusing a Breath Test in Virginia

If you drive on Virginia roads, you automatically give implied consent to submit to a breath test or blood testing should you be pulled over for suspicion of driving drunk. If you refuse that testing, you could face serious civil consequences in addition to criminal charges of driving under the influence (DUI) and driving while intoxicated (DWI). 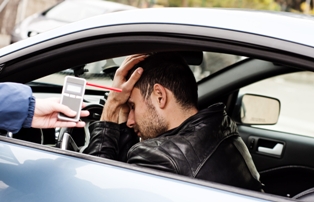 What Is Implied Consent?

Whether or not you are a licensed driver in Virginia, when you operate a vehicle on Virginia roadways, you must submit to breath and blood tests if law enforcement believes you’re drunk or impaired. Simply by operating a vehicle, you are agreeing to those tests. These tests must be administered within three hours of your driving and may include:

An officer may request a preliminary breath test, which is used like other field sobriety tests—such as walking in a straight line or following a pen with your eyes—to establish probable cause that you’ve been driving under the influence. It’s important to remember that you have the right to refuse this test. Although it’s extremely likely you’ll be arrested if you do so, your refusal alone cannot be used as evidence against you later in your case. However, if you refuse the preliminary breath test and are arrested, you will then be asked to submit to an evidentiary breath test or blood test at the police station within three hours. These tests can be submitted as evidence against you during your case, and refusing to submit to these can lead to serious consequences.

After you’re arrested and taken to the police station, you will be asked again to provide samples to determine your sobriety. If you are unable to provide a breath test or refuse, police will ask for a blood test. Refusing to comply with either of these tests or both comes with penalties:

If you refuse either of these tests or both at the police station, your refusal can be used against you in court later on. Additionally, as soon as you refuse to submit to a test, the arresting officer can suspend your license immediately—although the time during this administrative suspension does not count toward your punitive one- or three-year suspension that could follow.

You Have the Right to an Attorney

While being arrested, the officer will read you your rights—and one of these is your right to an attorney. You should exercise this right and reach out to an experienced lawyer who can take proper action in your case. If you’re not sure whether you should hire an attorney, remember that:

Additionally, if you choose not to hire an attorney and are convicted of a DUI/DWI in Virginia, you face severe penalties.

If you were pulled over for a DUI, refused the preliminary or evidentiary sobriety tests, and charged, you need the help from our experienced DUI defense lawyers. The team at Kearney, Freeman, Fogarty & Joshi can help you build a strong case, get your license back, and avoid a DUI conviction. Get in touch with us today by filling out the online contact form on our website.