When You Resist Arrest or Assault a Law Enforcement Officer

If you’re accused of committing a crime such as drug possession, drunk driving, or murder but are also accused of resisting arrest or assaulting a law enforcement officer, the prosecution must   prove each element of each crime before convicting and sentencing you. 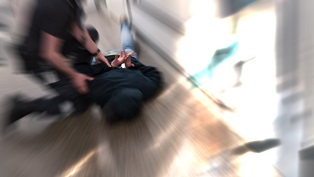 Virginia law prohibits a person from intentionally preventing or attempting to prevent a police officer from lawfully arresting him. To prove the charges against you, all of the following must be true:

The government must prove all three elements of resisting arrest beyond a reasonable doubt to convict and sentence you for this crime.

Resisting arrest in Virginia is a class 1 misdemeanor. If you are convicted of this crime, you could spend up to 12 months in jail and face a fine of up to $2,500. Both the jail time and the fine are in addition to the sentences for any other criminal convictions.

Assault Against a Police Officer

As with the crime of resisting arrest, the government must prove the elements of the crime beyond a reasonable doubt before you are convicted and sentenced for the crime.

An assault and battery on a police officer is a class 6 felony in Virginia. That means a conviction carries a potential sentence of one to five years in prison and a fine of up to $2,500.

Additionally, if the assault and battery interfered with the police officer’s ability to do his job, you could face charges for obstruction of justice, which would bring an additional penalty of up to 12 months in jail and a fine of up to $2,500.

If you are charged with resisting arrest, assault and battery of a police officer, or obstruction of justice, you need to take charge of your defense. Criminal cases can be complicated and confusing, and you have a lot at stake.

Our lawyers will thoroughly investigate the allegations against you, protect your rights throughout the legal process, and help you achieve the best possible outcome based on the facts of your case. From the time of your arrest through any potential appeals, our Virginia criminal defense lawyers will provide you with the representation you deserve. Contact us today, by phone or by filling out our contact form to learn more.