Emergency vehicle drivers have a very difficult job. They’re first to respond to every fire, robbery, and vehicle accident, frequently working under stressful and dangerous conditions. The nature of these emergencies frequently requires them to speed, run traffic lights, and engage in other potentially dangerous behavior in traffic. While it is understandable that emergency vehicle drivers must sometimes drive in an aggressive manner, they’re also obligated to maintain control over their vehicle and avoid causing an accident. Lives are at risk, either way. If an emergency responder arrives too late, someone could lose his life. But, driving recklessly also puts innocent lives in danger. 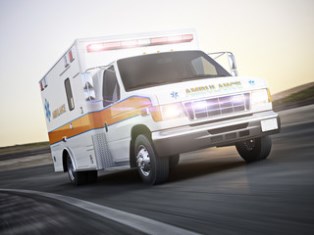 If an emergency vehicle driver fails to operate his vehicle safely, he may be responsible for damages caused during an accident. Some of the ways in which the driver may be found negligent and responsible for a wreck include:

Since drivers of emergency vehicles are usually in a hurry to reach their destination, other drivers should use extra care when they’re on the road with one of these vehicles. Here are some tips you should know in order to stay safe:

In Virginia, Ashley’s Law requires drivers of police vehicles, fire trucks, and ambulances to use their lights and sirens when responding to emergency calls. They are also required to use their horns while crossing intersections or yield the right-of-way to oncoming traffic. SB 762 was passed in response to the death of Ashley McIntosh in 2008. She was fatally injured when a police cruiser ran a red light without the siren turned on. Prior to the passage of Ashley’s Law, emergency vehicle drivers were permitted to run red lights at high speed without using the siren if the driver deemed it “reasonably necessary” to do so. This type of latitude resulted in Ashley McIntosh’s death.

Emergency vehicle operators have a tough job. They must attempt to arrive at a scene as quickly as possible yet do so without causing an accident. While the passage of Ashley’s Law is one step toward preventing traffic collisions with emergency vehicles, crashes can still occur. If you or a loved one suffered injuries in a collision with an ambulance, fire truck, or police vehicle, you need professional representation from an experienced personal injury attorney. Contact the attorneys of Kearney, Freeman, Fogarty & Joshi, PLLC by using the form on this page.